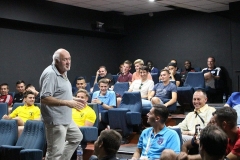 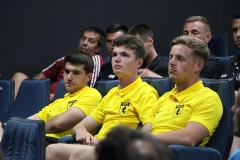 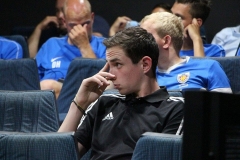 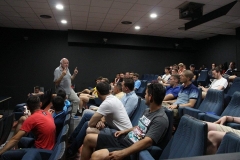 Every year Referee Abroad welcomes a number of famous referees and observers who attend our events to support our young up-and-coming officials in their development. You can see a full list of our guests over the years, at this link.

During this year’s Paris World Games we had the pleasure of welcoming one of the greatest referees to ever walk on this planet our ours, Mr. Michel Vautrot of France.

Mr Vautrot, arguablythe best French referee in history, was a FIFA referee between 1975 and 1991. After retiring from active refereeing, he sat on both the UEFA and FIFA referee committees, becoming one of the true “masters” of world refereeing.

Among the many important games refereed by Michel Vautrot, these are certainly worth a mention:

Michel Vautrot attended the Paris World Games as a referee observer. He praised Referee Abroad and its young referees for the good performances.

On the evening of July 11th he then graciously accepted our invitation to hold a masterclass for all the tournament’s referees. During the evening, he discussed all aspects of refereeing and talked to our officials about his great career and its many “curios moments”.

It was for us a great pleasure to welcome Mr Vautrot. Merci, Monsieur!

You can watch the full video of Michel’s masterclass below. It’s about 1 hour long.