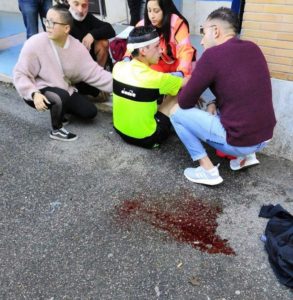 Our founder Daniel Curcio spoke today with Talksport, following a shocking attack on an Italian referee that was left bleeding and in a life-threatening condition on the ground on the weekend.

Here’s what he had to say:

“Meanwhile Riccardo Bernardini, 24, was described as in a “life-threatening condition” after being struck at a match near Rome, cracking his head on concrete as he fell.

The incident at a game between Virtus Olympia Roma and SB Atletico Torrenova 1986 has prompted the Italian Referees Association to announce an amateur referee strike across the Lazio region this weekend.

It has been described as a “unique” decision that has followed months of anger at a perceived lack of action from authorities.

A Turkish referee commented on a Referee Abroad Facebook post: “Two assaults against my colleague in the team, once (sic) attempted with a gun. One attempt against me physically…At least 5 times waited for police escort. It is just 2 years experience of a Turkish referee and just one of the reasons why I quit.”

Mr Curcio added: “It is unacceptable. The bodies that govern football should do everything within their power to reduce this phenomenon.”