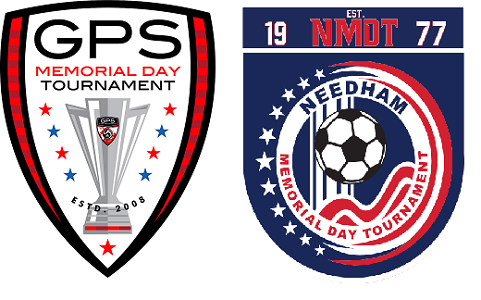 APPLY
Please Note The 2020 edition of the GPS Memorial Day Tournament was cancelled due to the coronavirus pandemic. Applications are now open for 2021 edition.

The GPS Memorial Day Tournament is America’s largest spring football event. Hosted in Boston and its surroundings (all sports complexes are located within a 45 minutes drive from the city), it uses some of the best playing surfaces in all of the United States.

This showcase tournament has been in existance since 2008, and welcomes every year more than 1000 teams from all over America. The largest one-weekend soccer event in the United States kicks off with games in Lancaster, MA at 5pm on Friday and continues until champions are crowned on Monday afternoon.

This annual event, now in its 12th year, marks the conclusion of the Spring soccer season and offers players from U11 to U19 an opportunity to face off against top-notch competition from around the country.

Since 2021 we also partner with GPS’s sister tournament, the Needham Memorial Day tournament. This is a fully fledged Referee Academy, organized in partnership with our American partners US Officials. Referees attending this event can expect 4 days of intensive referee education administered by coaches and instructors from FIFA, the MLS and the National referee development program in the USA.

All referees who referee adult football and who are 18 years of age or over are welcome to apply for the GPS Memorial Day tournament. In order to take part to the Needham Academy instead you must also be over the age of 18 and be an up-and-coming referee in your home country.

The tournaments offers free accommodation (in twin rooms) during the weekend (Friday to Monday), as well as free lunch (on the fields). Free water and Gatorade are offered on the fields.

Referees will also receive a stipend of $350. They can expect between 4 and 6 games per day.

Please note – in order to receive money from the tournament, you’ll need to apply for the appropriate VISA (B1/B2). People who travel on the “Esta program” (visa waiver) will not be paid.

All accepted referees will be accommodated free of charge in hotels in close proximity to the fields in either Boston or one of the surrounding suburbs.

Referees will be able to check-in on the Friday, and check-out on the Monday after the end of the event.

Referees can expect free accommodation based on double or triple occupancy in the same room. Hotels are of high standard. Academy referees will be accommodated in a university residence together with the other fellow referees and all instructors.

New England is a six-state region in the northeast corner of the United States of America. It is one of the oldest settled parts of the US.

Centered around the city of Boston (one of America’s finest, a must visit!), New England roughly covers thje area of the original colonies and is, as such, America’s oldest region. There are many historical sights in New England, including many colleges, universities, monuments and architecture. Yale University in New Haven and Harvard University and MIT in Cambridge, MA are destinations, offering a variety of interesting museums, as well as nonstop cultural activities.

In its small area New England packs a lot of natural beauty. Highlights would include: pastoral villages with white-steepled churches throughout rural New England; sandy beaches and moorlands along the southern coastal area of Rhode Island, Connecticut and Massachusetts, including Cape Cod and adjacent islands; the more rugged rocky coast and cliffs of Maine; the nearly alpine scenery of Vermont, northern New Hampshire, and western Maine; and dense forests everywhere.

While New England is served by many international airports. most international travellers arrive via its main gateway, which is Boston Logan International Airport (BOS). Most European airlines have direct flights into Boston and fly there daily. Examples are British Airways, Aer Lingus, Iberia, Air France, KLM, Lufthansa and many others. Many low-cost airlines and Canadian airlines also fly to the city which is the US’s closest main city to continental Europe.

If one wants to combine a visit to this tournament with a trip to some of America’s other major cities on the East Coast, flying into New York or Washington could also be considered. From New York or Washington, Boston can easily be reached by either driving, bus (Megabus or other companies) or train (Amtrak). The Acela Express runs high-speed service between Washington, D.C., Baltimore, Philadelphia, New York, and Boston, departing roughly hourly.

The GPS Memorial Day Tournament was a great tournament which combined quality refereeing, a great visit to the city of Boston, and an awesome group of referees which made it a fantastic weekend. I  truly had a great time, and I hope to attend again in the future.

“The GPS Memorial Day Tournament has truly been an incredible experience. I met a lot of great people, and I definitely got to improve my refereeing skills! A well-organised tournament in a lovely city such as Boston. I really hope to be welcomed back soon!”

RA gave my group the unique opportunity to experience football in different parts of the world. I’ve had the pleasure to work with, learn, and bond with referees from all over the world.  The tournament organizers at the GPS Memorial were also very hospitable, and made us feel welcome. I highly recommend.

Apply for the Needham Referee Academy

You also confirm you are an up-and-coming referee in your home country. Proof of this may be required at a later date.